The epilogue is so short that I can squeeze another Dan Andersson in:

At Hattmomarja river there stands a run-down shack
the lowest and the simplest to be found there,
a hundred men and horses from far and wide still track
and tip their load of bones on the ground there.

The miller there’s an old man, his mind fully set,
he tirelessly grinds without cursing –
when he rests he listens, smiles as he hears the duet
of the dancing two mill stones conversing.

And he says that when the stones dance away over bones,
once they’ve ended their leaping and their springing,
then sing aloud, they sound as if they’re bells made of stone,
to an honourable funeral they’re ringing.

And he says that his mill is like all human life:
Just a twisting fate, endless once started,
and the cog-wheels’ harsh creaking is like quarrels and strife,
but that bonemeal is like those departed.

For it lies there and will rest when its journey is done –
it ceases now its leaping and straining;
what was formerly fragile and hard is all gone –
there’s but snow-white, fine powder remaining.

And though some of them to quivering dancing should go –
e’en the merriest, the one least like stalling  –
though they shimmer like pearl-dust in evening’s soft glow,
will quickly tire and soon will start falling.

Is the Resurrection due perhaps when spring comes our way?
Will the trees then all be rustling and playing?
That which died just a week ago, was ground yesterday,
will perhaps in next year’s grain it be swaying?

But endlessly the stones creak, keep grinding along,
the dust still billows sky-high that’s found there,
the miller too claims that the bone-mill’s slow song
is the merriest of those sung around there.
Posted by John Irons at 13:44 No comments: 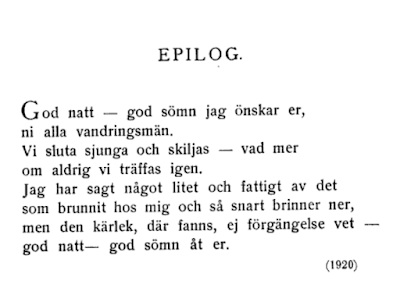 Good night – sound sleep I wish to you,
to all you wayfaring men.
We cease our singing and part – more than true
should never we meet once again.
Just a little and poorly I’ve sought to convey
what burned deep within, though its flame’s almost through,
but the love that was there, it knows no decay –
good night – sound sleep to you.
Posted by John Irons at 06:56 No comments:

Two surprises came when I saw this poem. Firstly that it was Norwegian - I knew it from an EP recorded way back in the 1960s by the Danish singer Frode Veddinge. Secondly that the author was none other than Bjørnstjerne Bjørnson:

If you love me true,
I will love you too
till my days on earth are over;
summer hurried past,
grass pales far too fast,
through our play we them recover.

What you said last year
I recall so clear,
like a bird outside it’s sitting,
on my pane it raps,
chirps, predicts perhaps
sun-warmed joy that’s unremitting.

Littly-littly-loo!
Can you hear me coo,
lad behind the birch-hedge hiding?
Words will fade away, –
night now follows day,
maybe you can do the guiding.

Shoo-ee, shoo-ee, miss!
did I say a kiss? —
No, a word like that confuses.
That’s what your ear caught?
pay it not a thought, —
I will send you my excuses.

Oh, good night, good night!
sleep now holds me tight,
your mild eyes I dream of nightly
and the words unsaid,
that escaped and fled, —
scatterbrained they flew so lightly!

Now it’s time to close.
No more words than those?
All the notes the air’s retrieving, —
how they tempt me sore, —
are you out for more?
Such a warm and tranquil evening.

The best-known example of an outsider in Danish literature is Svante, a figure created by  Benny Andersen. He shot to fame with the recording made of the songs by Poul Dissing in 'Svantes Viser', which appeared in 1973. But the songs are part of a whole epic about Svante. To see the whole book in English, go to here.

To listen to Poul Dissing singing this song in Danish, go to here.

Night is so cold.
Life is so short.
Friends move out further
off than they ought.
My tongue’s all mouldy, my soul’s lost its pep.
And each time I move it’s a backward step
You must just keep your spirits primed.
I am drunk and I’m feeling fine.

Cobbles for bread.
Traffic like shears.
Zips and not buttons.
Music that sears.
Stars that are sooty and grins that don’t fit
and porter and belches and aquavit.
You must just keep your spirits primed.
I am drunk and I’m feeling fine.

Tiredness and tears.
Shouts like coarse rope.
Hands quite rejected.
Hope without hope.
Toothache. Insomnia. Gastric distress.
But life’s worth a hangover still, I guess.
You must just keep your spirits primed.
I am drunk and I'm feeling fine.

To hear Thorstein Bergman sing this song, go to here

I’m a fiddler, play at dances, at a funeral or wake,
in sunshine or when clouds cause the moon’s soft gleam to quake.
I refuse to take advice and I will play when I decide,
I play just to forget that I’m alive here inside.

I’ve no wish to thresh cut rye and I’ve no wish to gather flax,
for the hand that makes strings quiver shall stay soft and free of cracks.
You must never call me lazy, never curse the way I feel,
though at times I’d rather starve than have to play to earn a meal.

I’ve no wish to till the land, my axe for chopping wood to whet,
rather dream beneath bird-cherry trees until the sun has set.
And in evening’s crimson fire to stand up tall when day is done
and stroke my fiddle’s strings till your eyes burn like evening’s sun.

I shall fiddle when you bury those you love the most ere long,
I shall garner grief and sorrow into one great wordless song.
And the blackness that was death and which stood there beside your bed,
it will gush out like a stream of pure grief which my strings spread.

I shall join the long cortege through autumn dales in night-time rest,
and to smoke from hundred charcoal stacks shall sing like one possessed.
And when night o’er foaming forest stars sends billows black as coals,
All my bass notes will call deeply from the depths of human souls.

I’ve still three strings of sorrow – the fourth I cannot mend,
it quivered till it broke at the grave of my best friend.
But even unto death I’ll always follow you with song –
and I will die and keep on playing till the Last Day comes along.
Posted by John Irons at 11:11 No comments:

To listen to Alf Cranner sing this song, go to here.

Sven Svane went walking down a lonely country road,
He there met a wayfarer that had no fixed abode;
Good day to you, traveller, and listen to me do,
Please say if these riddles four mean anything to you:

‘The sun is yet rounder than the wheel that’s most round,
And angels in creation are the fairest singers found,
The moon is yet whiter than is swan’s down,
And thunder’s cry is louder than the crane’s sound.’

‘If this you know truly, you need know nothing more.’
Sven Svane took off the ring of gold he always wore
And gave him for answering correctly,
And then they both went on their way directly.

Jeppe Aakjær wrote a poem/song in 1905 about a roadman called Jens Vejmand, based on a real-life character Jens Nielsen (1832-1901), who was employed under Ringkøbing County in west Jutland and given the responsibility for a section of the road between Herning and Holstebro. He worked on this until de died. It is said that Jeppe Aakjær paid his successor 25 øre to tell him about his predecessor. The song was set to music by Carl Nielsen two years later and became immensely popular.

Who’s sitting by the shelter
with hands where rags do cling,
with eye-patch made of leather
and shoes held on with string?
It’s no one but Jens Roadman
who must, shall he be fed,
transform with his own hammer
the hard stones into bread.

And should you travel townwards
behind the farmer’s mares,
and pass beside an old man
eyes watering with tears –
It’s no one but Jens Roadman,
straw-clad round legs and knees,
who seeks in vain for shelter
so he won’t have to freeze.

And should you journey homewards
while showers and gales molest,
the evening star a-trembling
from cold in due southwest,
and hear the hammer singing
behind you close somewhere –
It’s no one but Jens Roadman
who still is sitting there.

And so he smoothed for others
the road that’s hard to go,
but when it came to Christmas
his arm said to him ‘No.’
’Twas no one but Jens Roadman,
his hammer fell from sight,
they bore him o’er the heath on
a cold December night.

There stands within the churchyard
a board now half-decayed;
that skews obliquely sideways,
its paintwork faint and frayed.
It’s no one but Jens Roadman,
his life was full of stones,
but on his grave they gave him
not one to mark his bones.

Listen to the 1941 recording with Aksel Schiøtz here