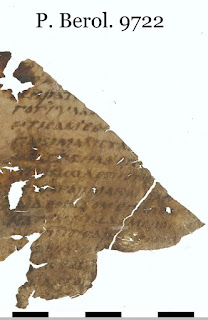 Oh Gongula, I have the snippets of my yearnings

from sunken cheeks that emanate the scent of grass,

your high-pitched laughter, fragile as is new-blown glass,

the artless grace of your two lotus eyes so massive

existence on a day drenched by the sun once more,

which your unfolding, you and you alone then saw,

and from the transience of all your words so chilling

which on the seven lyre strings through the song went drilling,

now re-discovered in the hope-destroying sand

of a quite empty, sun-scorched and unlikely land

and excavated with chilled instruments, unfolding

with nails that hoped for you. And I now stand here holding

the crumbling fragments of your skin and memory

to gnaw at edges of the lightly, palely written

papyrus. The sole remnant of your song unbitten,

is, bar your name, a fist of stuttering great woe

insistent wish to die, a pathway to be finding

to dew-encrusted banks down by the Acheron.’

Before the song began your life perhaps was gone.

Oh Gongula, the flakes of broken sighs once uttered

about the voices of blue butterflies that fluttered

in Lesbos’ young spring skies, when every wind was blond

still as the song, and then your peplos, caught by song,

just danced, as did the wind, round you, round every gesture

your Alma Tadema-like staring in this vesture

as, ’gainst a column, you leant like a statue there

of tantalising bronze that twirls a lock of hair,

as if for history you simply stood there waiting

I now hold in my clumsy hands in the large hall

of Berlin’s institute and would need to know all

the language of dry forms to read you through their phrasing.

And of your being, which folk painfully were praising

which bore your name ere you were mourned there’s but your name,

reposes in card-index boxes and editions.

You’re fleshed out with the aid of metrical positions.

Oh Gongula, your name echoes the loss of you.

The greatest ever poet came to your assistance.

In Sappho’s song your life has gained a new existence

So after Sappho’s death you were by no means dead.

or murmured, sailing all the way from Mytilene

to Corinth or Priene, somewhere in Cyrene

at some small feast perhaps they sang about your fame

or on Aegina once some fisher hummed your name.

But time can even so erase immortal verses,

A man called Caesar set the city all alight

and old papyri gave the fire yet greater might

with everything consumed by flames, as too the yearning

of Sappho and myself for cheeks no more returning

and naked feet that walked on marble, cool as snow.

And many centuries past your one long ago

you died a second time for good – the fragments lying

in my two hands can only emphasise your dying

because they form a constant memory that you

have been forgotten. But I know I’ve known you too,

oh Gongula. I hear the echo of your shadow

and see that you beget the spring just like a swallow.

So I tear up this verse that time will now reclaim

and hope that what perhaps survives contains your name.