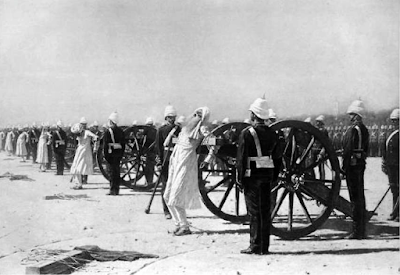 I was one of those who were lashed

to the muzzles of the cannons

for our part in the struggle for liberation,

that which they called the Sepoy Rebellion.

The balls that smashed us to smithereens

continued on through the years

knocking piece by piece off their empire.

The last thing I saw was the British flag

that had already lost its red and blue –

on its way to becoming a fluttering rag,

the photograph used was found on the internet here:
https://victorianweb.org/history/empire/1857/nypl8.html