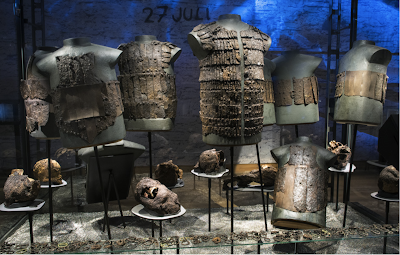 Armour worn by the Danish troops at the massacre of Visby, Gotland, in 1361

That day the sky was as if newly born.

We fortified ourselves with an old hymn,

I one of the few from Eke parish

in the peasant army scraped together

in the hope of casting the Danes out into the sea.

But many were disabled, others ill.

with scythes and fear as weapons

The citizens up on Visby walls

let themselves be rid of us.

Before the mercenary’s raised axe

I was an exhausted ox.

My wife sought my body in vain.