The medieval hall church at Vamlingbo, Gotland, has a set of murals on its northern wall, one of which depicts the Archangel Michael weighing the soul of the Holy Roman Emperor Henry II (Henry the Exuberant). He died without an heir. 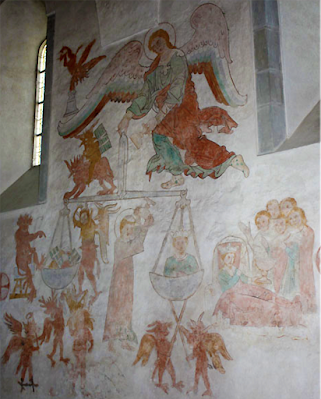 On the wall of Vamlingbo church

the archangel is weighing my soul.

My scale pan has room for an upper body

topped by an imperial crown.

Imps are constantly pressing it upwards.

In the opposite scale pan the devil has stuffed

my wars, intrigues and breaches of faith,

for good measure – the massacre in Pavia.

He also weighs down the rim with his foot.

Added to my own scale pan is fortunately

all the wealth I have made over to the church.

But heaviest is probably my vow of chastity

and thereby the cluster of unborn children.

I believe that it is by forgoing

that the soul attains its weight.