One poem from '1001 POEMS' by the Danish writer Klaus Høeck

beneath every so
nata is the sound of a
second sonata
that never saw birth - a wild
mirror-image so
nata full of secret moon
light full of calcium and
of pain a more beau
tiful sonata
perhaps than the one
that you heard played on the keys
of reality
Posted by John Irons at 11:41 No comments:

Snow
So, we got snow after all,
and there I was thinking we wouldn’t get any snow,
and it really looks as if we’re in for a right load of snow,
and not go on eternally thinking about snow without it coming.
The air too has snow in it,
it’s almost laden with snow,
perhaps there’s heavy snowfall far off,
that you can sort of feel inside you
without directly knowing it,
but that comes so that you can see it.
I’ve been hoping for snow all the time,
it’s funny even so that it came.
Yes, there it lies now –
look how white it is,
I’m really bloody pleased about it,
I’ve probably been thinking all the time that it would come.
And then all of a sudden there it is –
it’s funny even so that it comes like that
without you doing anything to make it come,
I haven’t plucked it out of the air,
it’s sort of come by itself.
(1934)
Posted by John Irons at 08:07 No comments:

On the far side
In memoriam H.F.
On the far side, by the ruff of reeds
beneath the lovely blue sky
in the target
the arrow is motionless. But after a while
it quivers, tugs itself free,
speeds fixedly poised back across the river,
brakes hard and resumes its position on the bow
beside your steady eye.
Posted by John Irons at 15:33 No comments:

Uplifted
If it was swans I cannot know for certain,
whose thousand wingbeats late that autumn night
lay round about the house and sang their flight,
subsiding only with dawn’s lifted curtain.
Throughout the day I walked as one elected,
as if I had been brushed by angels’ wings.
How many sleepless nights have there been since
when not one single wingbeat was detected?
Uplifted thus but once, there’s every reason
to let the sun again now call the tune:
the waxing and the waning of the moon,
the coming and the passing of the seasons.
Posted by John Irons at 13:14 No comments:

First verse of the 'Solstice Song' by the Danish writer Johannes V. Jensen

Solstice song
Our sun has now grown cold,
we are in winter’s hold
the days are waning.
Now, past the deepest night,
our hope burns bright –
yes, hope burns bright,
for now the sun will right,
now light will soon return, the days again are gaining.

It has been drawn to my attention that there already exists a fine translation of this poem by Christopher Middleton. You can find it here. I deliberately avoid looking at other translations before attempting my own. I am convinced that any great work of poetry/music is open to many different interpretations. As long as no mistakes of interpretation are involved, it is my conviction that it is enriching to see/listen to as many versions as possible.
Posted by John Irons at 16:16 No comments:

A poem by the Dutch poet Martinus Nijhoff

THE CLOUDS
I still wore boy’s clothes and lay side by side
Outstretched with mother in the heath’s warm lair;
Above us shifting clouds were drifting by
And mother asked me what I saw up there.
And I cried: Scandinavia, and: swans,
A lady, and: a shepherd with his sheep –
The wonders were made word and drifted on,
But I saw mother, smiling, start to weep.
Then came the time I kept the earth in sight,
Although up in the sky the clouds were rife;
I did not seek to try to catch in flight
The strange thing’s shadow as it grazed my life.
- Now on the heath my lad lies next to me
And points out what in new clouds he can spy;
I’m crying now, for far off I can see
The distant clouds that made my mother cry -
Posted by John Irons at 17:55 No comments:

A poem by the Dutch poet Anneke Brassinga

Drift ice
The shining mist already outlines shadows.
We pull up the water right to our chins
like sheets, so ripplingly cool and fresh-starched,
we come to be bedded together, forever entwined
in the gauze of times past, when peacefully
no word we gave to what binds us, sleep
of unmoored reason, towards dreamed-up monsters.
Posted by John Irons at 10:40 No comments:

End of the summer holidays
This was the time our pockets all hung low
with fall-clipped fruit now smeared with streaks of clay.
This was the time the garden candles’ glow
lit up the crayfish dish with quivering ray.
It almost felt too cold to take a swim,
and cobwebs draped themselves round scrub and fern.
When too the last hay had been taken in,
the sky was chill and clear, the wind quite stern.
These were the days when grudgingly one weighed
each hour till summer’s quota had been filled.
This was the time when every hour displayed
an inner force that was to be distilled.
And yet at times one left all play behind
sought out a hill where it was good to lie
and with a ten-year-old’s dark-musing mind
observe the swallows’ flight and clouds file by.
One evening, with the wooden houses burnished
a glowing crimson by the sun, one left –
holding the farewell gift that summer furnished,
a bag of Astrakhans, clasped to one’s chest.
One rode off to the station, tearful-eyed,
while crickets, drunk with joy, still chirped and squealed
their final summer notes on every side
from what were empty, cattle-trampled fields.
Posted by John Irons at 20:38 No comments:

'Stenkista' - a poem by Lars Gustafsson 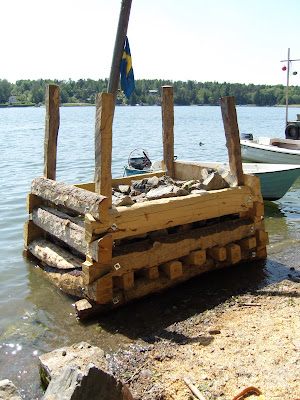 Stone caisson
At a funeral
I met, for the second time in my life,
Uncle Sune.
He had a wonderfully heavy head
one of those heads
you know you would appreciate
holding in your hands and turning thoughtfully
even as a hosed-down cranium.
What are you up to now? my uncle said.
And I, caught in the middle of a rainy summer:
Building a stone caisson by the shore of Hörende lake.
(Which on that day was perfectly true
I’d actually been working on
it for weeks, to avoid doing something else.)
My uncle, with that heavy head,
looked up with fresh interest.
Really nothing else
than an old crofter from Småland:
‘Laying down a caisson. Heavy work that.’
***
I later realised that such knowledge was unusual
Most people are completely ignorant
when it comes to stone caissons.
They think you’re talking about sarcophagi,
huge coffins of stone*, neatly plinthed up
in old wearisome cathedrals,
repositories for no longer actual
rulers or insane princes
who we have no need of here.
Nordic Familybook, second edition,
naturally has plenty of information as always.
The caisson consists of a joined-together box
of sturdy timber that is towed out
to the fresh water spot you want for it.
A quay. A bridge. Wood does not rot under water.
It is then finally sunk with heavy stones,
providing the abutment you were looking for.
In a cruelly changing world.
Many old quays and bridges in Sweden,
the wise book from 1904 says,
still rest on this type of foundation.
***
I’m still busy filling mine
with all kinds of heavy stones.
When I was very young
I did not really exist anywhere.
Now, with all these heavy stones on board,
with more coming every year, dead friends,
dead relations, dead expectations,
not to mention the great blocks of what’s unfinished
that will soon start to be dimly visible above the surface
everything is pretty much fixed.
(‘Laying down a caisson. Heavy work that.’)
But this caisson and I
are not exactly the same thing.
I laid it where it lies,
as the saying is,
‘with the intention of avoiding discovery.’ 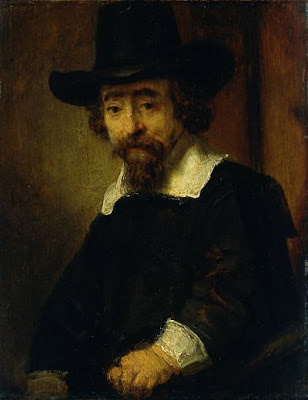 ‘So much has remained unwritten, so much too
that is impossible to describe because it stays
hidden to everyone for ever,’ he thinks
having shut the outer door behind him and placed
his one foot on the bottom step

in the shrouded ground-floor flat
he feels how his heart skips a beat and the blood
drains from his cheeks, catching
his breath for that one moment

just then there was, with the glittering brocades of sky
above the Leprozengracht, the loveliest part
of Vlooyenburg surely, his island in the Amstel, as never
so sharply before the feeling of being
both stranger and resident –

the cuff round the wrist of his hand
with which he grips the banisters and the collar
a flecked white, the darkness almost
swallows up the black of his top hat

still he stays motionless, his gentle, melancholy
eyes glisten as those of one who’s seen all the
pain and all sorrow of the world but nonetheless
is fond of life and gains consolation from
the ancient scriptures, from the psalms –

‘…light, yes, would dying seem to me if I knew
myself to be immortal…’
Posted by John Irons at 07:38 No comments:

Impasse
Seeking diversion in trifles is what keeps you going.
Practising scales. Loving someone endlessly. But,
what a letdown man is, infatuated, a slave of his organiser
and should he not fancy something, he breaks off the connection.
You smell how I decay, although I am not there, you’re lying, so I
imagine, staring enraptured at a monitor, at the first evidence
of life on Mars, there something innocent moves, something
that has a chance of success and without shifting your gaze
you grasp my hand – which is not there, hurrying to scribble
all this down, somewhere where I embark on pilgrimages
to buildings in high locations, completed long before Christ.
My hawser has snapped, I cannot heave myself on land.
When the city’s buzz soon dies away, I should see more with
these night-glasses. To make quite certain. But there’s nothing more.
Posted by John Irons at 13:02 No comments:

BOUTADE*
Oh land of filth and fog, of vile rain chill and stinging,
A sodden fetid plot of vapours dank and damp,
A vast expanse of mire and blocked roads clogged and clinging,
Brimful of gamps and gout, of toothache and of cramp!
Oh dreary mushy swamp, oh farmyard of galoshes,
With marsh frogs, dredgers, cobblers, mud gods overrun,
With every shape and size of duck that therein sploshes,
Receive this autumn dirge from your besnotted son!
To mud your claggy climate makes my blood set slowly;
Song, hunger, joy and peace are all withheld from me.
Pull your galoshes on, ancestral ground most holy,
You – not at my request – once wrested from the sea.

*A boutade is a sudden emotional outburst.
Posted by John Irons at 15:13 No comments: