For the English translation, go to here.
Posted by John Irons at 18:49 No comments:

'This is how' quartet by the Danish poet Katrine Marie Guldager

this is how i

This is how I bend over a child’s cradle
and all those
who bent over mine
are already gone.
This is how I stand under the tree top’s
untamed chaos
and call it a life, a direction:
The sun lights up an apple.
As if enduring was some sort of cure.
As if that was some sort of cure.
There is only one poem to arrive at:
An empty landscape.
A dripping tap.
The rustling of the leaves outside.
Those then were the people
we chose to be.

this is how ii

This is how it looked
when I returned:
The blue china cup stood exactly on the same spot
the chair half pushed away from the table.
But the fire had gone out and the coffee grown
cold.
The air stood still.
I sat down in front of the fire and threw a stick on the fire
that was now burning.
I thought:
I’m older now, certainly wiser.

this is how iii

This is how I shall give birth to a child
a split apple.
Half you, half me and yet something
completely different even so:
Blood, moondust, bird’s feet.
This is how I shall let go
of all that
which imperceptibly, most kindly omits:
To collect itself together again.

this is how iv

somewhere in the world i

there I was born

somewhere in the world ii

The slimy words are born
in their own slimy darkness
and somewhere in the dark they are frightened
at their own power.
Everyone wants to tell a story:
It was that winter
that man
that feeling
and the story chooses a handful of circumstances
and leaves the rest where it lies.

Somewhere in the world there is a house
where I cannot be persuaded to anything
where the mouth is full of shining stones.

somewhere in the world iii

And somewhere in the world there is a forest.
Somewhere in the forest thousands of ants leave
their bitter home, full of shame
carrying their torn-up leaves
torn-up sheets:
Crushed dreams.
Black will, pride.
For now is the time:

To find a place in the world,
To find that tiny still point around which all the rest whirls.
That dot.
That meeting:
Which is not death
just reminiscent of it.

somewhere in the world iv

Everything is still so intact.

Somewhere in the world I lean back in a plane seat
keep a lookout for the stewardess
think about opening a book and reading a bit about
a Russian poet:
Excuse me, is it alright to give birth here?

But somewhere in my heart I’ve long since landed.
I rev up in a blue Volvo
that has already left the station, the city,
that place in the world.

I sit in the car listening to the radio and smoking.
For somewhere in the world I’ll always be a smoker.
Afternoon, dusk.
You can see me now.
Posted by John Irons at 13:10 No comments:

I
The almanac filled in, future unknown.
The cable hums the folksong without a homeland.
Snowfall on the lead-still sea. Shadows
wrestle on the quay.

II
In the midst of life it happens that death comes
and takes a person’s measurements. That visit
is forgotten and life goes on. But the suit
is being sewn on the quiet.
Posted by John Irons at 19:27 2 comments:

A poem by Hanny Michaelis

this afternoon – the room
filled to the brim with sun
and sweeping baroque music –
I thought unawares
of what you once said
to me about
sorrow being the keynote
of existence.
That night tears
came to my eyes. Now
I just slightly
moved my head
like a donkey
plagued by flies.
Posted by John Irons at 18:25 No comments:

I’m playing Haydn after a black day
and feel a simple warmth in my hands.

The keys are willing. Gentle hammers strike.
The sound is green, lively and quiet.

The sound says that freedom exists
and that someone does not render unto Caesar.

I thrust my hands deep into my Haydn pockets
and imitate someone who gazes calmly at the world.

I hoist the Haydn flag – which means:
‘We won’t surrender. But want peace.’

And the stones roll straight through
but each pane remains unbroken.
Posted by John Irons at 21:09 2 comments:

to be authentic
and completely convincing
at the same time is
impossible though
the hedge violet was so beau
tiful that it worked
when i said ‘viola
silvestris’ - the word and its
meaning formed a com
plete synthesis a
nonymous like a sona
ta by scarlatti
Posted by John Irons at 09:20 No comments:

The famous Heaney poem in memory of his mother, translated into Danish

Translation of Heaney’s poem found here.
Posted by John Irons at 15:08 No comments:

A poem from my PA cycle

the art of swimming

Fichte by the kerosene lamp
Posted by John Irons at 11:40 No comments: 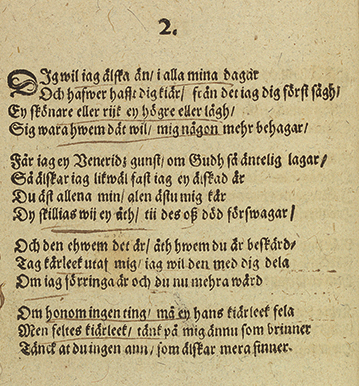 You will I love until my life on earth quite ceases,
And from first glance my heart’s been yours, as well I know;
Though lovelier or rich, of higher rank or low,
Whoever it might be, there’s none me greater pleases.

Should Wenerid spurn my love, assuming God decrees this,
E’en so I still will love, though love I must forego;
Yet you alone are mine, for you alone I glow,
Hence may we never part till death from life releases.

To him whoe’er it be you are consigned by birth,
Let him take love from me. With you I wish to share it,
Though I too lowly be and you of greater worth.

Of him speak not a word! His love, may nought impair it!
But should love lack, then think of me who still am burning,
Recall, you’ll find none else who loves you with such yearning.
Posted by John Irons at 13:11 No comments:

The maid in the guise of a bird

I know where there lies a forest,
far out at the edge of the fjord;
therein there grow the fairest of trees
that ever a man has heard.
So does a man gain his maiden.

Therein there play both the hart and the hind
and other beasts pleasing to see;
there sings so tiny a nightingale
up in a lime so green.

Of this learned Nilaus Erlandsøn.
[a hunting man known for his skill],
he had his steed shod with shoes of red gold,
and yonder he rode for a kill.

Yonder did ride Nilaus Erlandsøn,
so deep-felt was his rapture;
there he stayed for three whole days,
but never the bird did he capture.

Then traps he did set on all of the trees
the bird would choose to alight on;
the bird it grew so keen of eye
the net he never could tighten.

Then traps he did set on all of the paths
the bird would walk on by nature;
the bird it was so keen of eye
he never was able to catch her.

He took his axe up in his hand,
he would the tree have felled;
the man who owned the forest came,
his spear between he held.

“If you chop down my forefathers’ trees
and do me such a wrong:
I promise you, Nilaus Erlandsøn,
you’ll rue the day ere long.”

Then came the voice of the fair maid,
up from the top of the tree:
‘Young man, should you heed my advice,
Then yours the bird shall be.

Hark you well, you handsome man,
and heed you my advice:
without tame flesh you shall not catch
the wild bird in a trice.”

He cut the tame flesh from his breast,
he hung it from a branch of lime;
she flapped her wings, it pleased her well,
to gain such flesh lost no time.

It was the tiny nightingale
the tame bloody flesh she soon found;
then she became the loveliest maid
that ever had trod the ground.

The maiden under the lime tree stood
in silken shift of red;
the knight he took her by the arm,
their woes to each other they said.

The knight he took her on his arm,
her lily-white cheek he did stroke:
‘Oh tell me, dearest to my heart,
who then did such sorrow provoke?”

“At my father’s table I did sit,
with roses and lilies did play;
my stepmother came into the room,
who wanted to have me away.

She made a small nightingale out of me
and told me to fly to the wood:
my seven maids into wolves were all turned,
told to tear the bird if they could.”

The maiden under the lime tree stood,
tossed her fine golden hair;
out ran her seven maids to her,
as wolves they were all still ensnared.

Now has Nilaus Erlandsøn
defeated all fear and all harm;
now without a single care
he sleeps on his maiden’s arm.
So does a man gain his maiden.
Posted by John Irons at 17:03 No comments: