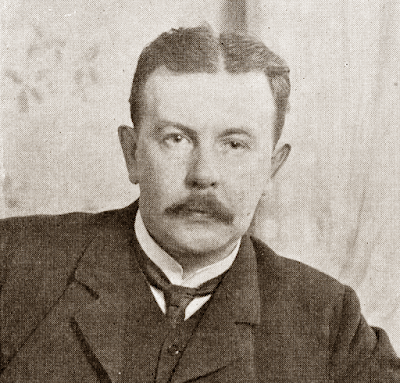 A master and lord sits in heaven’s hall

and up to hands age has blighted

a skein goes of thousands of strings in all

from each human life he’s ignited.

He joins them together, and if he should jerk,

we bow and we curtsey at his every quirk

and do pirouettes so amusing,

poor marionettes of his choosing.

We eat and we drink and we love and we fight

and die and to earth are committed.

We carry the torch of our thought so bright,

and deem our words strong and quick-witted.

We live in great splendour as also in shame

but all that goes under or may lead to fame

and all that can augur good fortune or ruin

is jerks on strings and his doing.

You ancient old lord up in heaven’s hall,

when will you finally tire?

displays the same lack of desire.

A jerk on the string – and everything’s gone

and all humankind can sleep on and on

and sorrow and evil rest from endeavour

in your great toy-box for ever.

two in one upon a ground

this yearning for stillness

not silence   not stasis

the eye of the storm

the music between the notes

the poem between the words

the pause before breathing in

not absence of breath

rather the presence of

the hidden pulse of things

and Strömmen with coal-black eddies flows past the quay’s confines.

Above the eddies the moon though trails out its gleaming coat,

and at this gleaming’s centre rocks a fisherman in a boat.

He starts to reel in his sinker. Let’s see what he’s caught tonight.

The mesh of his net seems brimful of scales that glimmer with light.

But it is merely water that glitters and runs away.

He fishes moonlight while singing and soon will be on his way.

What, poet, has your catch been in tonight’s fast-whirling stream?

A bubble. A drop of moonlight. A swift-dissipating dream. 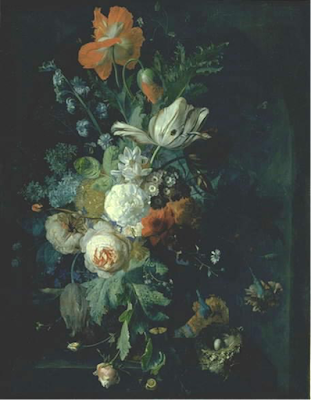 that needs air and lips to say it!

Clumsier than the shy wonder

wholly in your adoration

with your passion’s savage heart

you misuse your love and slay it:

Woe, if now that I need utter

(so compelled I sense my breast

gently moan when it is pressed)

I should cause this drop to flutter

shaken by my lips’ rough breath!

shows more mercy if you will:

every drop the eye beholds

it has plundered recklessly

in the air has scattered free

.. this one only lies there still,

trembling by an eyelash worn,

outmost in your diadem,

anguish that is sweet and tender

rolled on by your weighty gem;

lovely as the pearl whose splendour

merits it the heart of stars;

shattering and yet still whole,

in an angel’s saddened soul.

Oh! the smallest drop is christened

great which on that petal glistened.

Glistened? Yes, has it not vanished,

once the mouth did it impart

from the still ground of its heart?

Every instant seemed to call

for its weight to cause it fall.

That it should be ever spilling

ever with more gleam be swelling,

ever trickling and yet filling,

-- is a wonder there’s no telling,

at which I amazed do ponder

as if sound were captured there,

speeding swallow in the air,

image in the spring’s clear mirror.

Oh, what dread with sweet allure!

Drop that no more can endure!

Fly that wants to speed away!

Snail that now its house would move

to the leaf below, above!

Painted leaf that up would strive!

Oh, what dread with sweet allures!

While I stare at their profusion

I encounter in confusion

Oh, although you are so true

I can scarce believe you grew

’mongst the others on our earth

but in Eden had your birth:

Flowers! that you are therefore

flowers for certain and yet more:

Flowers of flowers, these corpses all

that enthral us in the garden

as pure spirits in God’s heaven

would most likely love appear

with its swarm of burning passion

as if lover, while embracing

with abandon his most dear,

had his heart cleft at the seams,

so one in a flash of sight

(swiftly as a glimpse one spies

of a phantom taking flight)

could discern its inmost dreams,

its sworn oath before it dies

in a faithless breath of air –

while it still is lying there

as a new-born, pure and fair,

who’ll turn into an offender –

its first words ere they are spoken

its great joy ere it has broken

and a smile has touched its lips.

Where is found so great a passion,

such great pleasure, choked by pain,

such a muffled heartbeat’s hush,

such a glow on lips that kiss,

such a bleeding heart-wound’s stain

as in that tulip’s deep abyss,

in the dark nocturnal scarlet

of this self-consuming garnet,

How delightful is the bliss,

of love’s sweetness when her yes

she gave to you, seen in the two

red roses that each other meet!

After kisses, such a thirst

that they both burn with fierce heat?

How must love’s remorse now hurt,

in this whiteness so serene?

Where an urge for joy so thrive

as in this carnation’s sheen?

Where a blood that so can glimmer

as its garnet dew-rain’s shimmer

for Zion’s blessèd sons a frieze

of such festive great marquees

bluer than the heaven’s bed,

finer than the modest veil

placed before the bridal mouth.

Innocence can boast no blue

so fine nor cold so shorn

as the hyacinth adorn;

tenderness so fine in muster

as the lilac’s full deployment:

every small flower in its cluster

is its own small vase, with lustre

Are so pure an angel’s mind,

and the martyr’s tearful stream

Oh, therein the saint will find

his devotions mirrored are;

for, despite its stem so raised,

it has bowed its pious head,

as if God in prayer it praised,

as if innocence could err

as if it had sinned instead.

And where could a thought be bred

in a young man’s brilliant brain

fiery as on flaming cheek

of this blood-red poppy sleek?

And where such an ardent plan

in manhood’s heart is ever thought

as the flaming vault whose span

in this tulip stretches taut?

And where did there sigh a prayer

that was e’er so chaste and fair

as that slender blue-eyed Mary

which so humbly, coyly clings

– coy as thought of silent tears –

to a moss-rose bud so clear?

And where is the bard that sings

equal to this mute small thing

if but once it bared its art

and its rosy lips would part?

Oh, could this bud speak to me,

and a spirit it inspire

(beauties may be begged with fire)

to inform me if it would

how such flowers came to be! 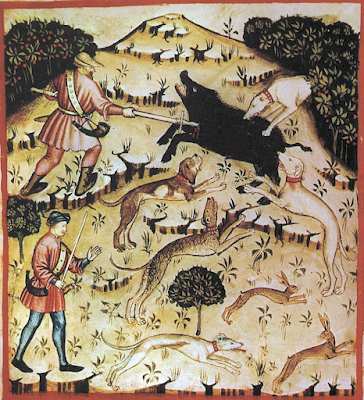 IN THE TIGHT-KNIT ENTANGLEMENT OF ROCKS AND BROOM

In the tight-knit entanglement of rocks and broom,

The soft snow thaws in patches of unequal size;

The heavy flakes latch onto boughs where there is room,

And clinging mist sinks into valleys from the skies.

No longer rattle trunks that are engraved with moss,

To sleepy echoes no sound ricochets across,

In the deserted wood, where gloomy night now falls

All’s quiet, subdued, except a husky horn that calls,

To bring back to the huntsmen the unsettled pack,

And, around his wallow, trampling through briars his track,

Close to a black stream where his shadow’s locked in mire,

(1) Hunting term: A furious male boar that clacks its tusks.

in fields that abound in 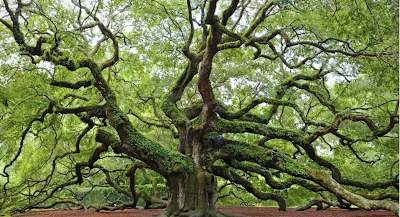 And tossing their stubborn brows,

Far from shrubs that know defeat,

The oak trees climb up the slope

With their huge and hook-like feet,

The weight of the wind the load

On they go, with red gold fed,

Towards peaks they envy so,

They go on, the oaks, they go;

Arms and legs by some hard blow

May well break; beneath their bark

Their great heart may cease to spark,

But nothing will hold them back

And vermilion laugh of glee:

The oaks, my brothers, I love,

That march to the sun above.