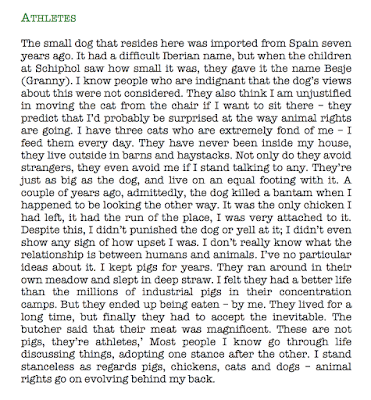 To see the original, go to here
Posted by John Irons at 13:49 No comments:

Earlier I used to think that De Lairessestraat was ten kilometres long. Logical, for I was a drowsy and dreamy child, and I used to walk slowly, look into every doorway, and even – in my own good time – count the number of paving stones. Later its true proportions came to light, though I still see it as a long street, even now. It runs straight as a die from the Amstelveenseweg to the Museumplein. There’s a tramline there, the no. 16. In that tram, as a 13 year-old, I had a major experience. There was a lot of traffic, the tram was travelling slowly, stopping at every stop. I kept looking outside at a man on a bike who was talking to himself. Sometimes we passed him, stopped – he passed us – and we caught up with him again. I was fascinated, he was alone in the world, noticed nothing, rode straight on and talked away incessantly. He was an island, he was self-sufficient. I remember very clearly that I made a decision – that’s the sort of man I want to be. After that, something has probably gone wrong – youngsters ought to have different dreams. At this crossroads, I made the wrong choice. If fate had not placed me in the tram or if I had been sitting on the other side of the aisle, I might possibly now be the managing director of an engineering works, or State Secretary or a general. It’s complicated – you’re able to make decisions, but they also have to accord with your character, your body, your temperament. For that reason I have never dared to talk to myself when in the city, where you are spied on from all sides. I only did this when I had arrived in a wood. Now that I often walk on my own along the edge of fields of maize and woodland paths, I do quite a bit of talking. I don’t control myself, I just go on talking. A kind of écriture automatique. My mind goes off on its own, I myself am absent. Often it comes up with small bits of verse or fragments from longer pieces of poetry. Jan Hanlo is often on the programme.

That’s it: turdus viscivorus. It’s great to mutter it and sometimes even to shout it out loud. As has happened a few times. I thought I was alone and in a simple cadence yelled out: turdus viscivorus. But I hadn’t seen that there some others out walking in the wood too, so that I had to pretend I was calling for my dog that had run off. A man came towards me and asked if he could help me to try and find my dog. What was its name, exactly? The man was fine, naive and self-conscious, independent and, especially, unaffected by the spirit of the age, he was not sarcastic, cynical or conceited – he probably had no TV, was an atheist vegetarian and didn’t think it was all that serious that Marianne Thieme believes in Jesus. I said: ‘The dog’s name is Turdus Viscivorus. If you take the left side, I’ll take the right.’
Posted by John Irons at 08:28 No comments:

A zkv from the man himself, A.L. Snijders 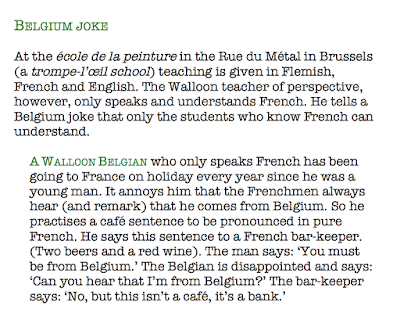 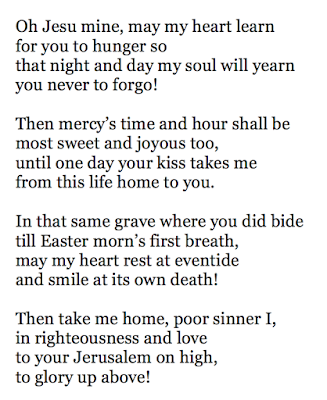 To see the entire story of the emergence of this hymn, go to here
Posted by John Irons at 10:01 No comments: 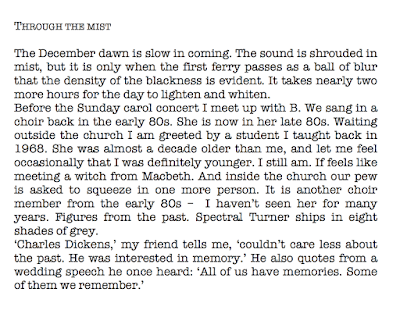 The snow’s now falling thick and fast,
And the boy runs hither and thither.
A great many miles does he slither
And slide now before the day’s past.

Great blocks of snow in the courtyard he rolls,
And into stout soldiers he makes them;
Much effort and toil does it take him.
The soldiers are given eyes made of coal.

He trundles the snow as if in a trance,
While the towering warriors stand gazing;
A breastwork he now works on raising.
The broomstick he gives them serves as a lance.

And now he is done, and his strength is no more;
His hands are both frozen and stinging.
With strong dreams soon to be winging
A restless night the boy has in store.

You hear him exclaim, the tired little one:
‘Tomorrow they all will do battle!’
Then rainclouds the sky shake and rattle,
And his warriors soon are all gone.

Before daring to execute your leap you had let the bee’s wax
with which your wings were to be fixed to your shoulder blades
harden firmly, while well aware
that you can never escape from any labyrinth
especially not the inner one

no matter how carefully your father set about his work
made use of his best implements, and chose feathers
with sturdy shafts and quills, the risks
remained enormous

which in the last resort weighed heavier against gravity
than the sensation of breaking free, being able to marvel at
the splendid panorama, the entire archipelago
hundreds of metres below you, the mainland still
many miles away

and on the thermal of a light breeze your daring swelled
into hubris, the shrivelling sun
robbed you of your pinions, you were already stone-blind
before the water closed above you

having so cleverly escaped from the convolutions of the maze
you hoped to transcend yourself by making a cast at what was
highest of all, for there for each attempt one must
of course begin repeatedly from the beginning: to capture
a glimpse of the infinite –

Time for a Brorson Christmas hymn! 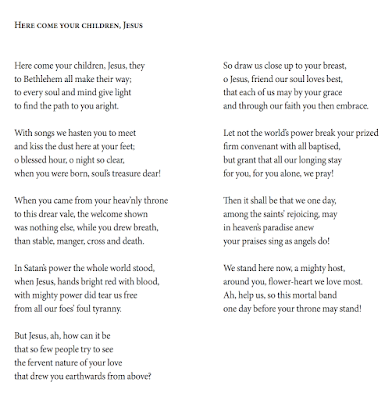 If you’re the highest representative
of the state
you walk across the market.

Where too little’s being sold
you buy what’s still lying there
before the big deals
come with a low offer
when the day’s nearly over.

Or you offer loans,
at an interest rate that’s lower
than that asked for by the banks,
so the sellers will be able to wait one day longer,
which also makes money for the state.

You start to sell
what you’ve bought from them
when the prices begin to rise
as if people expect
them to rise even further.

And when they themselves still have
what they can sell for the higher prices
you let them pay off their loans.

Don’t forget, part of your job
is keeping anxiety and compassion
separate from each other.

You can give hundreds of examples
of what weight is, but you only remember
just the one of them.

When you weigh a hundred and twenty
kilos because you
wanted to run into someone
who says to you: you can’t always
be that heavy.

And then one more; a child
with each of his hands
in the hand of one of his parents
who raise him up together and let him swing
while they walk on.

You make what’s light heavy
because you’re not good at it
and don’t want to learn from others.

After that you just will be asked
about what’s heavy
and you hope that in the meantime
– you can’t say how –
you’ll get better at what’s light.

Inside women are
smaller women,
sometimes larger women
and even larger women in those women.

The men
reveal to those who are unable
by pretending they are almost unable:
sitting still among shadows.

They reveal to those able to fly,
not like a bird
but like a bird being taken out
of a bird and then put back again.