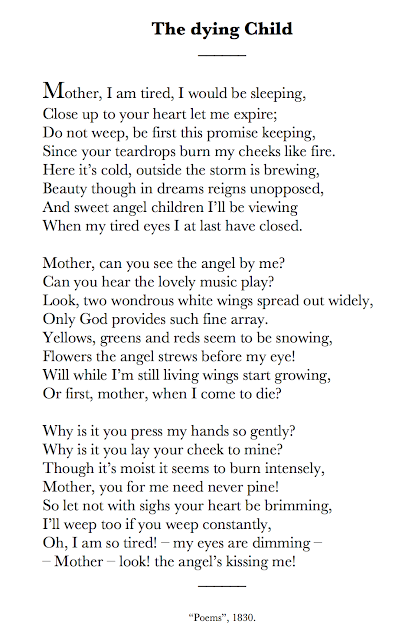 Charon his horn is sounding,
Storm winds commence their howling,
Hawsers, ropes, sails start bounding
and come loose apace;
Moon’s nightly round is ending
Stars gleam with dismal cowling,
To its great change is bending
Life’s allotted space;
Soon will my hour-glass have emptied,
Charon’s oars all have attempted,
Purling they burrow
Deep in each furrow,
Through bright waves sliding,
Death’s bark is gliding,
Jet-black the funeral ferry down the river strokes
To dust and smoke://:
And ghosts’ loud bays.

Landladies oh so dashing,
Brace me for this my journey,
When on my fathers’ ashes
I’ll be heaped tonight.
Red-faced and voice quite throttled
Innkeepers stand there sternly,
Chalk me up nigh a bottle
For my hat – that’s right.
Ma’am take the slate at the counter,
Rub out two pence for the flounder;
Likewise please cut a
Penny for butter;
Further the eel-fish
There in the green-dish;
Further the plump potato on which now I dine,
It was most fine ://:
And round and light.

While at my tankard sitting,
I my last will am writing;
This document most fitting,
Read, Ma’am, I implore;
Gone is this world’s dominion,
See how its taste’s more biting,
Heaven with stars its minions
Now above me soar.
I keep my tankard in motion –
Clang, what a brew, what a potion,
Foam mounts and frizzles,
Froth almost sizzles,
Drops in full spate float
Down on my greatcoat.
That hit the spot, Ma’am Maja, that was beer that sang.
Clang, Ma’am, cling-clang! ://:
Off Charon’s shore.

My head droops at all angles,
All of me’s forward nosing,
It seems my neck just dangles.
But, ye Gods, I wince
As tearful eyed I’m glaring
At all my rags imposing
Which once, no padding sparing,
Buttoned as if pinned;
Aren’t though my breeches quite charming,
These garments oh so disarming?
Waistcoat’s distended
All the rest mended
Stockings in creases,
Heels worn to pieces,
And that fine shirt, Ma’am Maja, was – please note my thrift –
Beckman’s wife’s shift ://:
Just two years since.

His eyes closed, he bends his head slightly,
the Roslagen waltz whirls him on.
As once in dark groves he held lightly
a Chilean girl’s neck like a swan;
||: As once his black curls he inclined to –
in some shanty town late at night –
a youthful princess he’d a mind to
with ebony skin shot with light. :||

So dance all the swaying young fellows
on Malaga’s wine-spattered piers
The blushing pale lass slowly mellows,
enchanted, entranced and all ears.
||: She smiles as huge fists hold her tightly
at all that he took and he gave,
she sighs and the wind answers quietly
from Åland’s sea’s turbulent waves. :||

To hear an old 78 recording, go to here

A lovely girl stands lonely in a bookshop out in Flen,
and dreams among the books of her domain.
On sale are paper, envelopes,
and mostly bibs and bobs,
despite this though advertisements proclaim:
Buy a Hjalmar Gullberg or a Vilhelm Moberg,
but buy it from the Violet of Flen.
All your cultural feasts, truly snuggly beasts,
you’ll get from the Violet of Flen.

We stock stirring stories, tales of former glories
here the muse of song delights to reign.
Poetry and prose, romance too who knows,
you’ll get from the Violet of Flen.

When local whippersnappers go out hunting or foray
they seem to be the town’s jeunesse dorée.
And if they ask the Violet if she’d like to join the guys,
she blushes and she finally replies:

A Vanitas poem by the Swedish poet Nils Ferlin

On the ladder of human desire
I have climbed up so far that I know
it’s as high as the heavens and higher
and deeper than deep below ...

And people have have busily climbed there
for thousands and thousands of years –
and no one has helped them to find where
it upward rears ...

But all who its rungs would endeavour
they leap as on hot glowing coals
and here in this life they will never
attain their goals.

On the ladder of human desire
I have climbed a few steps – so I know
it’s as high as the heavens and higher
and vanity’s all there’s to show.