Aristotle and the crayfish
We went to buy angling-worms
in a shop clearly intended for this purpose.
And we found what we were looking for;
fat, squirming angling-worms,
a kind the fish here seem to prefer.
But in the middle of this room a large old-fashioned earthenware jar
blue, round and full of young crayfish.
And my young son was inconsolable
at having to leave these wonderful creatures.
We bought two, and released them
in our clean, glass-clear aquarium,
where the goldfish moved slowly and solemnly
like old poets in a distinguished academy. And see,
a great darkness descended upon all things:
here expressions of opinion and discussions took place
beyond our comprehension; only seaweed
that floated up to the surface bore witness to
the contention that here was secretly taking place.
On the third day the aquarium cleared once more.
And became as before. But no crayfish
were visible. We decided they now
were living like hermits, in greater wisdom,
a life far removed from the general public
down below the sand beds.
So it continued for a long time, until one day
I opened my Aristotle
and found a very small crayfish corpse
flat as a plant in a herbarium
precisely in the short section where the Philosopher
talks about memory and recollecting
the past. And this chapter
one of the best things
ever written about memory,
will now for ever be associated
with an odour not easy to forget,
one of a slightly rotten crayfish. 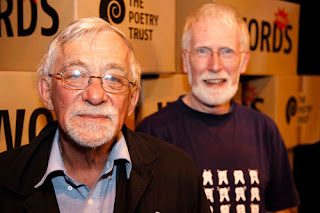