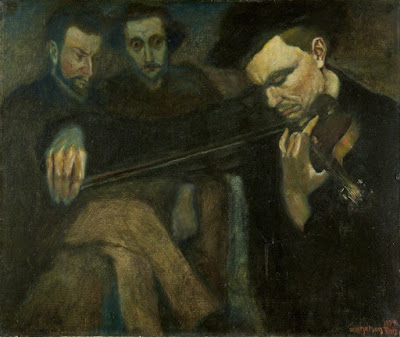 He tossed and turned as sweat-drenched on his deathbed he lay,
Gasken, fiddler from Särna i Sjö:
‘For the devils up in Erker’s Hall I’ll now have to play –
death brings horrors for a fiddler to endure!’

He clutched and heaved at blankets, kicked his legs to bloody smears,
the end-wall it splintered and it burst:
‘I have served my master Satan for thirteen happy years,
I have played myself to hell, I am accursed!’

And Banga, the good vicar, sought remedies and prayed:
‘Save the fiddler who has flouted all Thy laws!’
But Gasken’s mother countered: ‘He’s loved what has been played,
Gasken fiddler’s played divinely without pause.

It cannot be the Lord’s will that he must make his way
unsaved to sinners’ city to burn and ne’er be free;
Will He who over turtle doves and birdsong holds sway
not tolerate some dancing and some glee?’

And Banga, the good vicar, who in God’s house did pray,
he trembled, pale of cheek and throat quite dry,
black angels’ wings he heard clearly not far away,
now the Evil One would fetch his flesh to fry.

But Gasken merely swore and bewailed his great dread,
and for more time called out without cease
to atone for his lapses, receive wine and bread
and gain forgiveness for his sins and some peace.

Then up he rose and stood staring wild-eyed and grey
and gazed at Old Nick, with goat’s feet and tail,
who waved and bade him welcome to the blackies at play
and to sulphur-coloured gremlins’ dancing trail.

He then looked at his folk and he mumbled  goodnight,
and grew glad and his cursing was no more,
and died then with a mad, ringing laugh uncontrite
and quietly sank down on his bed of straw.

And silence spread among those at death’s final scene,
the Devil’s fiddler with his  playful, tuneful bow.
But next morning the clergyman Banga was seen
praying by his bed and pale with woe.

And but a shadow of himself was Banga now instead,
and could not preach as he had done before. –
To ferry folk across the Styx can fill one’s soul with dread,
to stand on guard at silence’s closed door.

But Gasken soundly sleeps now, under grass and grit –
perhaps things went his way next time around?
Perhaps at feasts at Abraham’s he plays as he sees fit,
where everlasting peace is to be found?

To see the original poem, go to here
Posted by John Irons at 13:11