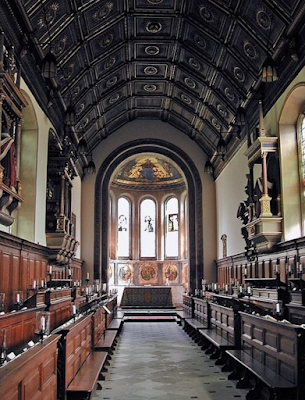 Twice a week there were late-evening vespers in the chapel of Gonville and Caius in the early 1960s. Since I was in the choir and sang there several times a week, I got to know the interior well – a long narrow chapel, with the typically dark wooden choir stalls. Vespers were best late on winter evenings, with only the candles in the stalls flickering in their glass holders. No choir, just a handful of students, but the dean, in a wonderfully clear tenor voice, would intone the prayers, closing with the Nunc Dimittis, in the 1662 version of The Book of Common Prayer:

Lord, now lettest thou thy servant depart in peace according to thy word. For mine eyes have seen thy salvation, which thou hast prepared before the face of all people; to be a light to lighten the Gentiles and to be the glory of thy people Israel.

And the outer world would drop away. The fact that I would have to cycle out to my digs on the Newmarket Road wearing my college gown over my thick coat since the University had its own little police force of a Proctor and two Bull Dogs to catch students disobeying some medieval law became irrelevant, and the beauty of the words chanted by Denys the Dean took over. And then there was silence.

And I departed in peace into what I was increasingly realising was a godless world.