Adam van Duren (c.1487– c.1532) Düren is a small town near Cologne Van Duren was a masterbuilder and stonemason. He worked at Linköping Cathedral, before travelleing to Denmark, where he worked in Elsinore and at the fortified castle of Glimmingehus in East Scania before being commissioned to work on restoring parts of Lund Cathedral. Both locations were part of the Danish kingdom at the time. His last task was renovating the bases of columns in Lund Cathedral, where he also sculpted an ass that had collapsed under its burden. The text is hard to read but probably in Danish, not Swedish (which would not rhyme): ‘Den maa vel et æsel være, some tager mer’ end den kan bære. 1527’ (A stupid ass a man must be who loads himself too heavily) – probably an ironic comment on himself. 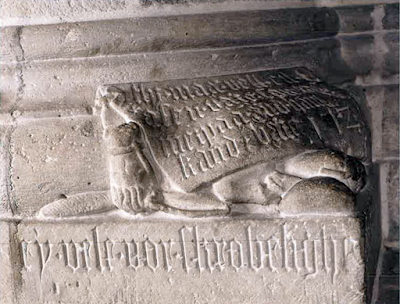 as is the chapel of Linköping Cathedral

where I captured the night’s starry vault.

the world does not exist before the world.

But before being swallowed by the drain of history

I came to realise my vanity

and carved into the base of a column

a relief of an ass brought down by its burden.