According to the cabled reports of last Monday, the disease of which Frederick III died was cancer of the larynx. The autopsy proved that the larynx was completely destroyed by cancer, and that purulent bronchitis existed. There was also inflammation of the finer ramifications of the bronchial tubes into which purulent particles had entered. The whole larynx was in a state of suppuration, and presented a soft lumpy mass, with scarcely any trace of cartilaginous structure remaining. There was nothing to show the existence of perforation of the walls separating the trachea and œsophagus. The choking sensation from which the Emperor suffered during the last of his life, which was attributed to such a perforation, appears to have been really due to collapse of the larynx, owing to the destruction of the cartilage. The direct cause of death is given as paralysis of the lungs, according to the cable reports. 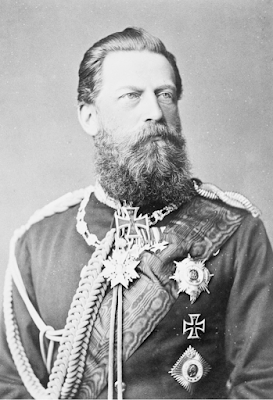 My last days were nothing but torment

when the cancer had spread to my entire body.

My son who had himself called Kaiser Wilhelm

refused me morphine out of hatred.

The only thing he agreed to

when the man could stand the screaming no longer.

This was how my son was preparing himself

before the great war

where the enemy was to be refused mercy

and the widows’ lamenting be endured.