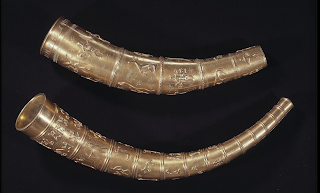 The Golden Horns of Gallehus, early 5th century, were stolen and melted down in 1802. The following year the young Oehlenschläger wrote this, one of the best-known poems in Danish.

They peer in pages
of ancient sages,
on opened barrows
their gaze now narrows,
on shield and sword in
each castle ruin,
on runestone boulders
midst bones now moldered.

“You days of glory
lost well past hoping!
when the North shone clearly
with heaven here nearly,
may we glimpse your story!”

“You who reel and are blind
will find
a relic of bygone year
that will come and disappear!
Its sides full golden
the stamp will be wearing
of times most olden.

Its lesson’s for sharing.
With reverent bearing
our gift you repay us
Of beauties the fairest,
a maid
will this treasure discover!”
They sing and pass over.
The airborne sounds fade.

Black Rimfaxe, fawning
his mouth flecked with lather,
plunges into the ocean.
Gates of the morning
are ope’d by day’s father:
Skinfaxe in motion
with fire seems to leaven
the arch of the heavens.

The birds are all singing.
Dewdrops give showers
To petals of flowers
That breezes are swinging.
And with graceful lilt
a maiden now dances
with violet-garlands
away to the field.
Her rosy cheeks bright,
Her hands lily-white.
Light as a deer
With spirit so clear
she floats sweetly smiling;
Love-thoughts beguiling
her mind in a tumble
she stumbles!
and sees as she gazes
golden blazes,
and blushes and shivers
and lifts with a quiver,
amazed at the sight,
from the earth’s black hold
with hands snow-white
the crimson gold.

A peal of
distant thunder!
The North’s
in total wonder

With crowds soon forming
now seething, now swarming
they dig without measure
for yet more treasure.
But no more gold!
Their hope was mistaken.
They see but black mould
from which they’ve been taken.

“For the precious few
who our gift well knew
who no earthly chains bind
but whose souls rise up
to eternity’s top
who sense what is high
in Nature’s eye
who adoringly learn
divine rays to find,
in suns, violets – in all,
the great and the small
who thirsting still burn
for the Life of Life,
who – oh great spirit
of ancient times! –
see your divine gaze
on its sacred sides,
for them is our stay!
A son of nature,
an unknown creature,
but strong and tall
as his fathers withal,
is tilling his soil,
we will honour his toil –
he’ll once more uncover!”
They sing and pass over.

Black Rimfaxe, fawning
his mouth flecked with lather,
plunges into the ocean.
Gates of the morning
are ope’d by day’s father:
Skinfaxe in motion
with fire seems to leaven
the arch of the heavens.

By woodland brow
The oxen heave
the heavy plough
and furrows cleave.
The plough seems to freeze,
and a shiver is heard
to pass through the trees.
Flocks of birds
cease to call
Holy silence
consecrates all.

The ringing of old
of ancient gold.

Gleaming pair from days of yore
in later ages dazzling.
Strangly they came as before,
on crimson sides so puzzling.

Sacred mystery enshrouds
ancient runes and signs.
A holy aura trembles round
these miracles from outside time.

Honour them, for fate can falter
soon maybe no more they’ll rove.
May Christ’s blood on God’s high altar
fill them, as did blood the grove.

You see gleam as the whole story,
not what’s venerable and high!
Only show their outer glory
to a dull indifferent eye.

Skies grow dark, the storms awaken!
Certain hour, your word is law.
What they gave has been retaken.
What was sacred is no more.