Anon: 'The maid who trod on the loaves of bread' (also a tale by Hans Christian Andersen) 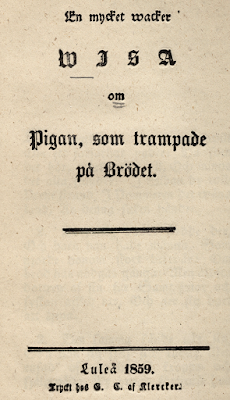 To see the original, go to here


The maid who trod on the loaves of bread

according to one source from 1657.
Various melodies exist,
here an own interpretation of the hymn
‘O Lord, chastise me not’ (1535)

With mournful voice in song I’ll tell
this story quite appalling,
Should this you hear, then mark it well,
and ever be recalling.
In Sibbau town near Pene strand,
in Pomerania’s fair land,
this wonder once did happen.

A needy peasant once lived there,
and children he had many,
who caused him worry and great care;
for bread he’d scarce a penny.
And so his eldest daughter left,
from all her loved ones now bereft,
to serve a wealthy master.

Once on her own though she begins
her usual self to alter;
she throws all caution to the winds
lets moderation falter;
spends every penny that she earns
on pomp and circumstance in turns
and plays the high and mighty.

Her master said: Desist, young maid,
ere some ill fate befall you.
from your true station you have strayed,
what is one now to call you?
You earn enough, and you can spare
your father something, that’s my prayer!
He begs to gain a living.

She answered: I am young and fair,
but fine clothes I am lacking,
if I should with my father share,
I’d have to wear coarse sacking.
I’d have to dress as others do,
no, I shall keep what is my due
for I deserve each penny.

When her old father later died,
to this quite wealthy daughter
her mother, weak, from grief red-eyed
on crutches came and sought her,
for help she earnestly did crave
to lay her husband in his grave,
as God himself commands us.

She’d have been rich if she had not
for fourteen years just squandered,
if out of arrogance severe,
she’d sinfully not wandered.
She answered: What’s all that to me?
from all expenses I’ll stay free,
my money I’ll not fritter.

New clothes I simply have to buy
on market day tomorrow,
you really can’t expect that I
to do this now should borrow.
It’s news indeed the way I dress,
whereas there’s no one could care less
what grave the old man lies in.

Her mistress, hearing words so cruel,
with Christian kindness sated,
compassion as her golden rule,
much money then donated;
consoled, the woman went her way
for she could now afford to pay
to bury her dead husband.

As godparent the maid swore oath,
adorned though without merit:
renouncing God and virtue both
for arrogance of spirit.
Her mistress gave her fine loaves two
to give her poor old mother who
such help most sorely needed.

She walked a bit along the path,
the bread’s weight much resenting,
she scorned her mistress’s kind heart
on mother curses venting;
she came to quite a muddy patch –
note well what plot she then did hatch
to keep her new shoes spotless.

No stone or foot-bridge came along
upon which she could scramble,
a detour made her path too long,
with dirt she would not gamble;
she thus arranged the two loaves so
upon them she dry-shod could go.
But vengeance lay in waiting.

Her feet at once both lock on tight
when on the bread they’re treading,
in vain she tugs with all her might,
blasphemes, foul curses spreading;
but like a large half-buried stone
stands motionless, so too her own
two legs seem firmly grounded.

When punished thus herself she saw,
she soon began her weeping,
both earth and heaven did implore,
with tears down pale cheeks seeping.
All folk for church were outward bound,
this frightful sight did them astound,
and to the priest confide this.

The priest, the mass when sung, now plans
to go and view this wonder.
And there the sinful woman stands,
about to buckle under.
She begs for help from every man;
they all attempt, but no one can
stir feet so firmly anchored.

The priest advised her on the spot
to mend her way of living,
acknowledge sin, for often God
would show himself forgiving.
She then called out: I wretched child,
in sin’s mesh have myself beguiled;
what’s sown I now am reaping.

God’s word I’ve hated, I confess,
the priest I’ve scorned at leisure
I’ve caused my parents much distress,
have yearned for earthly pleasure.
To shun God’s gifts was my desire;
now I am racked with torments dire,
my just deserts I’m getting.

Oh all of you who gaze on me,
learn from my ways so errant,
remember God should worshipped be,
and honoured every parent.
flee pride the root of all disdain
of all that God did e’er ordain;
let my fate make you wiser.

And scarcely had she said these words,
her voice was almost breaking,
than what had seemed like rock-firm earth
did move and started quaking.
She both her hands in prayer did knit
and then sank down into a pit
that covered her completely.

Oh humankind, consider well:
conceit and pride be shunning,
and sin, wherever it may dwell,
its fearful snares so cunning.
Her fate should fill with fear and awe,
and make you sin and pride abhor,
if you aspire to heaven.

To see a translation of the Andersen tale, go to here