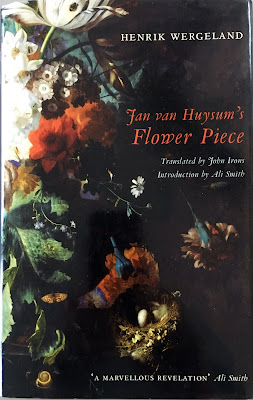 'Henrik Wergeland is a poet almost unknown outside his native Norway, where he's held to be  the  pioneer of modern Norwegian literature and carries something of the same symbolic status as Burns does for Scotland.'

'He was a republican who befriended kings [...] He was a bankrupt, a flagrant sentimentalist, a passionate educator, a fierce democrat [...] A pragmatic Romantic, he worked for the enlightenment of the working-class Norwegian people, for cultural and official acceptance of the Norwegian language and above all for the public education of all.'
(Quotations from Ali Smith's introduction to 'Jan van Huysum's Flower Piece' - 'a fable-poem which imaginatively  explores the  source, not just of a single piece of art but the notion of art itself')

It is a strange mixture of poetry and prose, but the opening pages, even in translation, indicate the vast scope of his undertaking:

Clumsy human admiration
that needs air and lips to say it!
Clumsier than the shy wonder
humble beasts display, you blunder
wholly in your adoration
squander in rapt adulation; --
with your passion’s savage heart
you misuse your love and slay it:
your adored unsullied art.
Woe, if now that I need utter
(so compelled I sense my breast
gently moan when it is pressed)
I should cause this drop to flutter
from van Huysum’s soft rose petal
shaken by my lips’ rough breath!
Spring breeze, giddy, slow to settle,
shows more mercy if you will:
Dew’s bright gleam from grove and hedge
rain with iridescent edge,
hid in lady’s-mantle folds
every drop the eye beholds
it has plundered recklessly
in the air has scattered free
.. this one only lies there still,
at its rim like teardrop borne
trembling by an eyelash worn,
outmost in your diadem,
anguish that is sweet and tender
rolled on by your weighty gem;
lovely as the pearl whose splendour
merits it the heart of stars;
full as Magdalena’s tears
full and heavy, almost bursting;
shattering and yet still whole,
as sound counsel ripeness nears
in an angel’s saddened soul.
Oh! the smallest drop is christened
great which on that petal glistened.
Glistened? Yes, has it not vanished,
like a word’s for ever banished
once the mouth did it impart
from the still ground of its heart?
Every instant seemed to call
for its weight to cause it fall.
That it should be ever spilling
ever with more gleam be swelling,
ever trickling and yet filling,
-- is a wonder there’s no telling,
at which I amazed do ponder
art’s great virtue, Nature’s error,
as if sound were captured there,
speeding swallow in the air,
image in the spring’s clear mirror.
Oh, what dread with sweet allure!
Fear of wind and sun’s bright ray
Drop that no more can endure!
Fly that wants to speed away!
Snail that now its house would move
to the leaf below, above!
Painted leaf that up would strive!
Flower-cadavers that yet live!
Oh, what dread with sweet allures!
While I stare at their profusion
I encounter in confusion
features of long-past amours.
Oh, although you are so true
I can scarce believe you grew
’mongst the others on our earth
but in Eden had your birth:
Flowers! that you are therefore
flowers for certain and yet more:
Flowers of flowers, these corpses all
that enthral us in the garden
as pure spirits in God’s heaven
are like corpses in their pall.
Ah, like this bouquet in fashion
would most likely love appear
with its swarm of burning passion
as if lover, while embracing
with abandon his most dear,
had his heart cleft at the seams,
so one in a flash of sight
(swiftly as a glimpse one spies
of a phantom taking flight)
could discern its inmost dreams,
its unspoken aspirations
its unborn deliberations
its sworn oath before it dies
in a faithless breath of air –
while it still is lying there
as a new-born, pure and fair,
who’ll turn into an offender –
its full hope, ere wings sprout tender
like the flower’s heart-leaf tips,
its first words ere they are spoken
its great joy ere it has broken
and a smile has touched its lips.
Where is found so great a passion,
such great pleasure, choked by pain,
such a muffled heartbeat’s hush,
such a glow on lips that kiss,
such a bleeding heart-wound’s stain
as in that tulip’s deep abyss,
in the dark nocturnal scarlet
of this self-consuming garnet,
this convulsive, sickly flush!
How delightful is the bliss,
the intoxicating instant
of love’s sweetness when her yes
she gave to you, seen in the two
red roses that each other meet!
After kisses, such a thirst
that they both burn with fierce heat?
How must love’s remorse now hurt,
blushing red with paleness strive
in this whiteness so serene?
Where an urge for joy so thrive
as in this carnation’s sheen?
Where a blood that so can glimmer
as its garnet dew-rain’s shimmer
scattered o’er the pearl’s frail skin?
Sweet devotion’s keenest eyes
never saw in distant skies
for Zion’s blessèd sons a frieze
of such festive great marquees
as convolvuli here spread
bluer than the heaven’s bed,
finer than the modest veil
placed before the bridal mouth.
Innocence can boast no blue
so fine nor cold so shorn
as the hyacinth adorn;
tenderness so fine in muster
as the lilac’s full deployment:
every small flower in its cluster
is its own small vase, with lustre
of a porcelain’s half-shine,
full of honey’s sweet enjoyment
full of butterflies’ rich wine.
Are so pure an angel’s mind,
virgin’s thoughts, a new-born’s dream
and the martyr’s tearful stream
as narcissus’ pallid star!
Oh, therein the saint will find
his devotions mirrored are;
for, despite its stem so raised,
it has bowed its pious head,
as if God in prayer it praised,
as if innocence could err
as if it had sinned instead.
And where could a thought be bred
in a young man’s brilliant brain
fiery as on flaming cheek
of this blood-red poppy sleek?
And where such an ardent plan
in manhood’s heart is ever thought
as the flaming vault whose span
in this tulip stretches taut?
And where did there sigh a prayer
that was e’er so chaste and fair
as that slender blue-eyed Mary
which so humbly, coyly clings
– coy as thought of silent tears –
to a moss-rose bud so clear?
And where is the bard that sings
equal to this mute small thing
Floral mysteries, the chary,
if but once it bared its art
and its rosy lips would part?
Oh, could this bud speak to me,
and a spirit it inspire
Oh, I’d beg it if I could
(beauties may be begged with fire)
to inform me if it would
how such flowers came to be!