I met Norway for the first time from the air, preparing to land in Bergen at 5am in the summer of 1966 to work on a farm in Feios, Sogndal. This is what I saw. 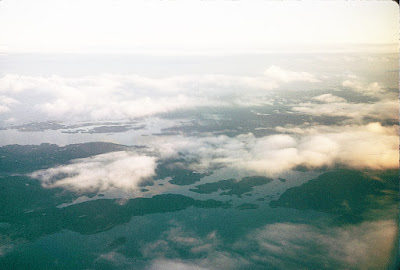 After completing a hay harvest, picking raspberries on the farm and cloudberries up in the mountains, I left for Oslo and bought an LP  of Norwegian folk songs ('Fiine Antikviteter'), sung by Alf Cranner. The first track was 'Roland og Magnuskongen', a medieval ballad:

“Six of my jarls at home shall bide and guard the gold so fair, –
Six more shall hie to heathen lands and test their cold steel there.
- Off they then rode from Frankish lands on horses freshly saddled,
blew the horn called Oliphant, at Roncevaux did battle.

They hoisted up their silken sail until it topped the mast,
Then off they sailed to heathen lands till fourteen days had passed.

Oars and anchors caught at last upon the silver sand:
Roland, loyal kinsman of the king, was first to set foot on land.

The blue-faced Moorish army did fill both mountain and dale:
“Warriors from Christian lands are they, with helmets like vermeil!”

The king of all the Blackamoors, who had seemingly lived long:
“The Christians who our taxes seized would seem a fearful throng.

Can we not get our taxes back from these who fear no fray,
we shall advance to Roncevaux and fight for two or three days!”

Forward the Moorish hordes all surged, they blotted out the sun;
then did Roland’s comrades fear, and begged him sound his horn.

Roland replied to them with wrath, his mouth was flecked with foam:
“I shall hew such mighty blows, they’ll be known till doomsday comes!”

They battled out at Roncevaux, they fought for two or three days;
the heathens fell before Roland’s sword that scythe-like all did slay.

They battled out at Roncevaux, and all were full of wrath.
the heathens fell before Roland’s sword like snow drifts o’er the heath.

Forward the Moorish hordes all surged, they blotted out the sun;
then did Roland’s comrades fear, and begged him sound his horn.

Roland angrily replied, mouth dripping with blood and foam:
“I shall hew such mighty blows, they’ll be known till doomsday comes!”

They battled out at Roncevaux, blood in rivers did flow;
the horses could not tread the ground, on corpses they must go.

They battled out at Roncevaux, their weary bodies dulled,
the sun no longer could shine clear for the haze of human blood.

Forward the Moorish hordes all surged, they blotted out the sun, –
and all of Roland’s comrades feared, and begged him sound his horn

He placed the horn to bloodied lips and blew with all his might;
o’er mountain and heath the sound was borne, crags and fields it did blight.

He placed the horn to bloodied lips, in wrath he let it bray:
then crofts and farms began to shake that lay nine days’ journey away.

Roland, loyal kinsman to the king, he blew the golden horn:
it split the walls and marble stone and Charlemagne’s tower was shorn.

Forward the horn’s clear call did surge, in sword sheaths it did sound –
Roland blew till his eyes stood out, for they threatened to bring him down.

Charlemagne, the mighty king, then gave a cry forlorn:
“What can it be that ails my man? For now I hear his horn!”

More haste made Charlemagne the king than he’d e’er done before:
warrior Roland he lay dead, clutched in his hand his sword.

“In twos now all of you go out, let all your peers partake,
see if they from Roland’s hand the Bane of Dwarfs can take!”

Back again the men soon came, but not as they had planned:
“We all have failed the Bane of Dwarfs to wrest from Roland’s hand.”

Forward then stepped king Charlemagne, by sorrow he was gripped:
Roland let the sword slip free, as ’twere a royal gift.

Forward then stepped king Charlemagne, with longing he was racked:
Roland let the sword slip free, as if ’twere handed back.

Homeward then journeyed Charlemagne. From grief all bowed their heads –
the ship was laden with silver and gold, the heathens all were dead.

“Why sit you here so tired and wan? drunken yet listless all?
Have you been lying sick abed, or did brave young warriors fall?

“No need to wonder, my fair queen, if we have grounds to grieve:
Roland, loyal kinsman, is no more, brave men this life did leave.”
- Off they then rode from Frankish lands on horses freshly saddled,
blew the horn called Oliphant, at Roncevaux did battle.

And here is Alf Cranner singing it
Posted by John Irons at 16:02