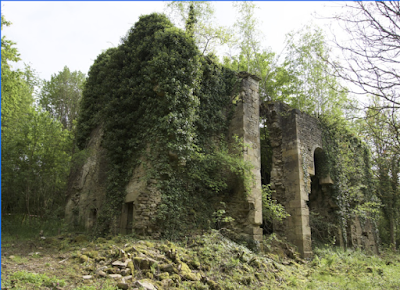 I still recall the old nag trot its tireless course,

So scrawny when in its harnass, a dream-like horse

Which in a great jangling of nuts and bolts and scrap

And tinkling bells, struck cobbles with its hooves’ hard rap.

See those departing down the early-morning lanes,

The endless silence of the drizzle-misted plains;

And at the verges of moist roads, the glossy hue

Of flowering soon-dried parsnips silvered by the dew,

And see, with their white graveyard walls, their drinking trough,

The place where horses for re-shoeing would stop off,

And golden slurry that round dung-heaps forms a frieze.

Whips in the wind a holly branch and lets it fall.

The jangling of the nuts and bolts I then recall

As too the gaunt old horse, its shadow quite insane

Dancing along the ground the sun turns brown again,

The ribs that could be used to mount when breathlessly

It wheezed. The dusty road of Provenchère I still can see

In my mind’s eye, or that which also wound its way

From far Saint-Blin, the poplars in the light of day

Flicking past till the axles’ endless squeak gained hold

And etching on blue sky their arrows of pure gold.

A ploughshare at full tilt unfolds the fertile soil

Pulled by the sturdy, willing horses as they toil

And tall against the sky, urging his team to great

Exertions. – Noon has come, the stop is at the inn,

The kitchen’s dingy, with its serge bed farthest in,

Where, gazing at the cauldron, a grandad leans back.

The men were out at work, the omelette à la crème

You whisk, the soup you soak – and gladly do the same –

And into thickish glasses, rinsed first in the sink,

You pour a heavy purple wine that’s fine to drink.

Soon evening had arrived, ecstatic was the peace

By the muddy ditches and the rotting fungi

Which wafted on to hearts that ached so wretchedly.

The beeches shed their leaves. There breathed an untamed soul,

And from the mosses and the rockfoils and the whole

And a sweet smell of nakedness rose to your lips.

The old horse trotted on; the quivering pale ghosts

Of ewes now crossed our path, abandoning the hosts

Of sodden stubble-fields, drowned by an unsure moon;

Half-open thresholds in the night blazed in the gloom,

With anxious heart you wished the moment would soon come

When you could glimpse far in the distance your old home,

And, straying birds, at last could snuggle down and rest

In – fashioned by your ancestors – your cosy nest.

This poem is so long that I have not printed the original first.
It can be found at: https://mariedauguet.blog4ever.com/le-voyage